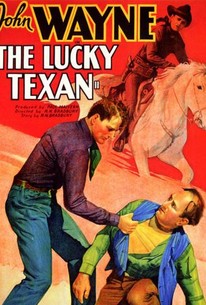 Number 3 in John Wayne's "Lone Star" western series was the lively Lucky Texan. Co-starring with Wayne is George Hayes, here introducing his grizzled-sidekick character long before adopting the movie nickname "Gabby." Accused by the villains of murdering his best friend, Wayne is exonerated when the "dead" man shows up in court to point the finger at the real would-be killers. The film winds up with a rousing chase on a gasoline-powered handcar, with Wayne dukeing it out with chief heavy Yakima Canutt (later the chief stunt coordinator on Big John's best films). Like all of the "Lone Star" Wayne westerns, Lucky Texan is crisply photographer by the great Archie J. Stout.

There are no critic reviews yet for Lucky Texan. Keep checking Rotten Tomatoes for updates!

There are no featured audience reviews yet. Click the link below to see what others say about Lucky Texan!