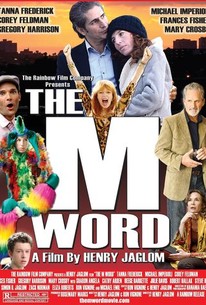 As he did in "EATING," "GOING SHOPPING," "BABYFEVER" and "IRENE IN TIME," Writer-Director Henry Jaglom gives us a bracingly funny, fearless and fast-paced human comedy about yet another vital issue facing all women at a certain critical turning point in their lives. Set in a struggling Los Angeles television station threatened by economic downturn, possible in-house graft and massive job loss, Tanna Frederick plays Moxie, a children's TV show actress who unexpectedly turns into a Joan of Ark (with the passion of Norma Rae) when she finds herself leading an extraordinary band of rebelling women demanding their rights as they anxiously face uncertain futures after their new boss (Michael Imperioli) and his second-in-command (Robert Hallak) arrive from New York on a devastating cost-cutting mission. All of Moxie's personal and professional assumptions and those of her long-time boyfriend (Corey Feldman) are turned upside-down as her mother (Frances Fisher), her two aunts (Mary Crosby and Eliza Roberts), and her stepfather (Gregory Harrison), join with dozens of her fellow female office workers to illuminate the struggles, challenges and joys of what is still, in some circles, referred to as 'The Change Of Life.' (c) Official Site

Lorna Richards
as Aussie
View All

News & Interviews for The M Word

View All The M Word News

Critic Reviews for The M Word

This is a sloppy, poorly paced effort that wastes a decent cast. The "M" might as well have stood for "mess."

Indie stalwart Henry Jaglom's new film stumbles too often, and is too awkwardly earnest, to be considered a success.

As cavalier with structure as ever, Mr. Jaglom surrounds himself with familiars who embrace his cheery, disorderly style. (His films feel like gatherings of old friends because they are.)

Jaglom smartly sees a parallel between midlife hormone upheaval and sudden workplace superfluousness, but his unstructured-gabfest approach makes rather a mess of it.

It's good. It's bad. I think it's called being human and Jaglom seems to embrace it.

The legendary Henry Jaglom proves as masterful as ever at creating fascinating characters designed to make you both laugh and reflect.

Like a number of cult directors to emerge in the 1970s, Henry Jaglom values a party atmosphere at the expense of narrative cohesion.

There are no featured reviews for The M Word at this time.