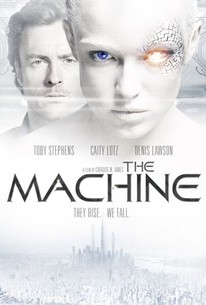 Critics Consensus: The Machine proves an audacious debut for writer-director Caradog James and a solid entry in modern British sci-fi, with thematic heft to match its genre thrills.

Critics Consensus: The Machine proves an audacious debut for writer-director Caradog James and a solid entry in modern British sci-fi, with thematic heft to match its genre thrills.

Critic Consensus: The Machine proves an audacious debut for writer-director Caradog James and a solid entry in modern British sci-fi, with thematic heft to match its genre thrills.

Two computer programmers fall in love as they create the first-ever piece of self-aware artificial intelligence, designed to help humanity. But things go terribly wrong when the British Government steals their breakthrough and teaches it to become a robotic weapon. (c) Xlrator

News & Interviews for The Machine

New on DVD & Blu-Ray: The LEGO Movie and The Grand Budapest Hotel
Critics Consensus: The Other Woman is Short On Laughs
Now Streaming: Close Encounters of the Third Kind, The Fifth Element, and More

View All The Machine News

Critic Reviews for The Machine

The result is a tad predictable.

"The Machine" percolates with an elegantly palpable sense of wonder and danger.

The Machine brings little new to the subject save for an ominously ambiguous conclusion about the consequences of making computers more advanced than their human masters.

A classy slice of cerebral sci-fi with a literary-cinematic heritage stretching back through Blade Runner and Metropolis to Frankenstein.

Former dancer Caity Lotz is good at lethal kicks and twitchy cyborg movements, but her ingenue manner and baby-doll voice don't make her any more convincing as a cybernetics genius than as a robo-femme super-soldier.

The Machine is a highly enjoyable and brooding sci-fi flick in the philosophical vein of Blade Runner, with a smattering of other similarly minded or styled classics.

Here, the actions and objectives of the government manufactured robots are as volatile and unpredictable as those of the scientists and officials who create them, resulting in scenarios which are as shocking as they're unexpected.

Thankfully, the film generates its brand of suspense courtesy of smart and intriguing performances contained in a compartmentalized caper

The Machinedeftly handles humor and action in good balance. With the excellent script the spectacular sets and retro synthesizer score make it a fun science fiction film.

With many writers and directors keen to give a look at a future ravaged by impending war, it's a breath of fresh air when someone shows an evolutionary leap towards harmony.

The film is ambitious visually, in spite of its small budget, and while not all of the effects come off, it's hard to hold that against an indie production like this.

Audience Reviews for The Machine

Released a year before Ex Machina, The Machine is very nearly the basic blueprint for it, to wit: scientists create a lovable AI (that happens to be a bodacious femme as well, natch) and begin to fall in love with it, er, her, ah, the program ("she's the only one who really understands me, yah?). This time out the government wants the robot/android/girlbot to be a killer soldier application as well, and homie don't play dat, yo! The technology part of the tale is on the backburner so this is very user friendly.

The British sci-fi thriller The Machine explores the age-old question of A.I. giving birth to artificial life. Set in a dystopian future where Britain and China are in a protracted world war, a MOD research scientist develops a neural network which he believes could be the key to creating artificial life. Caity Lotz stars as "The Machine" and gives an interesting performance. But, the script is pretty weak and does a poor job at explaining the war and how technology fits into it (other than the generic super-soldier cliche). There are also some leaps in logic and dropped subplots that add to the film's unevenness. Yet while it's problematic, The Machine does present some intriguing questions about man's evolving relationship with technology.

Astounding, captivating and engaging, The Machine manages to be one of the most original Science Fiction in recent memory. What we have here is a standout feature, a film that boasts terrific ideas, with exceptional performances. The story is very good, and is thoroughly engaging from start to finish. What makes this film stand out is the fact that the story is refreshing and it is quite riveting from the first frame onwards. The Machine is terrific Science fiction filmmaking, and aside from Gravity and Moon, is for me anyways, the finest films in the genre that has brought a new dimension to the genre. With great storytelling, director Caradog W. James crafts a stunning film that is destined to be seen as a genre classic. The film boasts some impressive effects as well, and the film looks great, and it has a sort of dystopia quality to the film that really makes the tone of the movie surreal and thought provoking. The Machine is one of those rare movies that is smart, and thrilling with its original take on a classic genre. With the bare minimum, director Caradog W. James was able to get something truly special on-screen. The idea is terrific, and the film itself feels like a real breath of fresh air, and in this genre, especially, it's particularly difficult to craft something that is bold, original and exciting. With The Machine, we get such a film, a movie that ranks among the most memorable Science Fiction thrillers in recent memory, and if you're a fan of the genre, you'll surely enjoy this riveting picture. I for one loved the film and The Machine is terrific picture from start to finish, one that belongs on the shelf of some of the genre's finest works.

Billed as a British Blade Runner, it's not, it's not even close. The first 2/3rds are decent enough build up but the last 3rd is just a load of action rubbish and a rush to explain everything that had been going on.