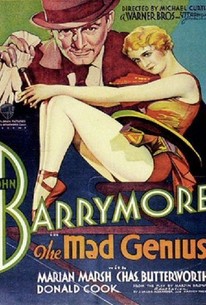 More of a follow-up than a sequel to 1931's popular Svengali, this drama centers on the attempts of a club-footed and insanely bitter dance instructor to cling to his protege.

Frankie Darro
as Fedor as a Boy

Mae Madison
as Olga
View All

Critic Reviews for The Mad Genius

With a complex character, John Barrymore demonstrates, once again, his size as a full-body artist, and puts in his accent and gesture all his dramatic power. [Full Review in Spanish]

Audience Reviews for The Mad Genius

This film feels a little like a Tod Browning production, with John Barrymore in the role of a dark, twisted man that we could imagine Lon Chaney playing for Browning, but it's actually directed by Michael Curtiz. Barrymore leads a ballet troupe and jealously guards his young protégé (Donald Cook), who he's raised from a boy since essentially stealing him from his abusive peasant father (Boris Karloff, briefly). He wants to use him to live out his own frustrated dreams of being a great dancer. He has no problem supplying the young man with lovers from the troupe, but doesn't want him to form any attachments, for fear it will impact his artistic abilities, and also of course because he's afraid of losing control. Enter Marian Marsh, a sweet young dancer who he falls in love with, thus setting up the central conflict in the film. When he's not busy trying to control the young man, Barrymore is up to no good elsewhere. He supplies drugs to his conductor (Luis Alberni), who is desperately addicted. He makes it clear to young ballerinas (Mae Madison and later Carmel Myers) that if they want to get ahead, they need to "see him" in his private office. He also berates his secretary (Charles Butterworth, who provides some comic relief with his bumbling), responding to one of his ideas by saying "It's incredible. It's unbelievable... that there should be any human being living who is such a stupid ass." Barrymore is excellent throughout the film and turns in a performance that dominates, though Cook and Marsh are reasonably good as well. The brief segments of ballet scenes, often in practice, show realistic and solid dancing. The film starts strong, but loses a little bit of its steam in the second half, and not completely living up to its potential. The direction from Curtiz is great, with creative shot angles and editing, but the plot is a little simple. It's hard to believe I'd say that a film with open drug use, predatory sexual behavior, and an axe murder wouldn't be dark enough, and yet, somehow I wanted more. Maybe I've been watching too many pre-code movies lately.