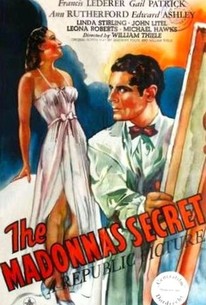 This drama is an updated version of Ulmer's 1944 film Bluebeard. It is set in New York and follows the exploits of an eccentric Parisian painter who has come to New York to escape a controversy surrounding his work. The trouble stems when the model he has used in all his work is found floating dead in the Seine. Later, his New York model is also found dead. When a second model is also found dead, her sister impersonates a model to prove his guilt. Instead she falls in love with him and helps to clear his name. (Interestingly, in the original, he was the killer.)

Will Wright
as The Riverman

John Hamilton
as Lambert
View All

Critic Reviews for The Madonna's Secret

There are no critic reviews yet for The Madonna's Secret. Keep checking Rotten Tomatoes for updates!

Audience Reviews for The Madonna's Secret

Decent little noir done on the cheap with several falling stars near the end of their careers. The culprit is rather obvious early and characters are dropped without explanation still it's efficently done and competently acted.