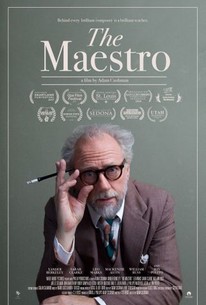 Mario Castelnuovo-Tedesco was a highly notable composer of over 200 Hollywood films in the 1940's and 1950's. Often receiving zero credit for his work, Mario went on to mentor some of our greatest film composers including John Williams, Randy Newman, Henry Mancini, Jerry Goldsmith and Andre Previn. The film is based on letters that examine Tedesco's teachings and his relationship with student Jerry Herst (played by newcomer Leo Marks), focusing on both the finer points of art and expression, as well as the realities of post-war Hollywood.

Critic Reviews for The Maestro

Still, amid the glorious music, the fine period re-creation and burnished photography, the emotionally sound portrayal of artistic endeavor and that award-worthy turn by Berkeley, "The Maestro" often scores.

A respectable low-key tribute to the talented composer...

The earnest but very modest pic will play best with film-score buffs, though most in that community will wish for a bigger focus (or any, really) on their heroes.

Upbeat... with great attention to details.

I have to do this

The student-teacher dynamic here is intriguing -- and not in the obvious way.

There are no featured reviews for The Maestro at this time.