The Magic Garden of Stanley Sweetheart (1970) 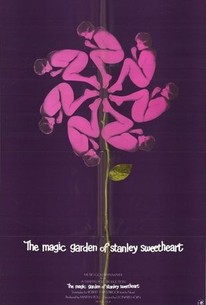 Don Johnson makes his acting debut in this way-out take on college life from 1970. He plays a college student searching for himself and his niche. Along the way he has lots of sex, takes drugs, and even appears in an underground film ("Headless"). It's all pretty dated, but still kind of fun. The soundtrack features such performers as Richie Havens, Eric Burdon, War, the BeeGees, and others. ~ Sandra Brennan, Rovi

Brandon Maggart
as Man in Cafe

Holly Near
as Fran

Victoria Racimo
as Andrea
View All

Critic Reviews for The Magic Garden of Stanley Sweetheart

Its camera swings and there is a lot of rock music on the soundtrack. However, like so many other places of expensive, modish, retail merchandise, it remains calculatingly bland.

In short, Stanley Sweetheart is a piece of cold, if ill-calculated, cynicism that tries to cover its tracks by zapping us with all sorts of visual tricks and trips.

There are no featured reviews for The Magic Garden of Stanley Sweetheart at this time.