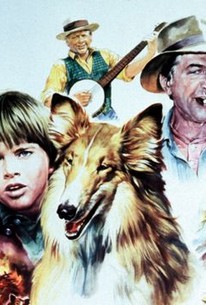 The Magic of Lassie Photos

This first Lassie film in nearly three decades (discounting the various feature-length compilations of Lassie TV episodes) is worth watching for its veteran cast. Lassie is legally wrested from freckled-faced Michael Sharrett by evil Pernell Roberts, who hopes that the kid's grandpa Jimmy Stewart will sell his valuable vineyards to "ransom" the dog. Roberts' scheme falls through, and Lassie makes her getaway, embarking upon a grueling trek to be reunited with her young master. Alice Faye, looking very well preserved, shows up to sing a song or two. Also contributing vocally are Pat Boone and Debby Boone and The Mike Curb Congregation; even Stewart gets to sing (he hasn't improved much since his last singing role in Broadway Melody of 1936, but you gotta love him). About the only cast member in The Magic of Lassie who doesn't sing is Mike Mazurki.

Alice Faye
as The Waitress

Mike Mazurki
as Apollo
View All

Critic Reviews for The Magic of Lassie

There are no critic reviews yet for The Magic of Lassie. Keep checking Rotten Tomatoes for updates!

Audience Reviews for The Magic of Lassie

There are no featured audience reviews yet. Click the link below to see what others say about The Magic of Lassie!

The Magic of Lassie Quotes