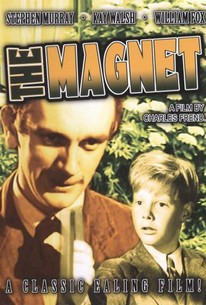 This gentle Ealing Studios comedy features young William Fox as a mischievous English lad. A goodly portion of the film shows Fox and his companions at play, aimlessly but enjoyably wandering about their neighborhood in search of adventure. Eventually the boy finds a discarded magnet, believing it to be a good-luck token; it turns out to be just that, enabling the boy to become a hero of sorts. The Magnet scores with young and old viewers alike, principally because it is told from the boy's point of view. William Fox would later sprout up to become leading British actor James Fox.

Julien Mitchell
as The Mayor

Critic Reviews for The Magnet

[The Magnet] will draw inaudible chuckles from people who never tire of psychiatrist jokes and invented childish antics.

The plot of The Magnet is not allowed to develop naturally, but is carried through a whole series of improbable coincidences and misunderstandings.

There are no featured reviews for The Magnet at this time.