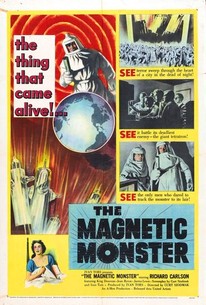 Working for O.S.I., the Office of Scientific Investigation, A-Man agent Jeffrey Stewart and his partner Dan Forbes are sent to a local hardware store where they find a strong magnetic field has magnetized every metal item in the store. Investigating further, they eventually trace the source of the magnetism to an airborn flight carrying scientist Howard Denker, now dying of radiation poisoning, who has carted on board with him a new radioactive element which he has bombarded with alpha particles for 200 hours. The element, dubbed 'serranium' grows geometrically by creating matter out of energy which it absorbs from metallic objects surrounding it. Stewart calculates that if the substance is not destroyed soon that within 24 hours or so it will have grown large enough to throw Earth out of its orbit.

Critic Reviews for The Magnetic Monster

'The Magnetic Monster' is one of the most original movies of the vast production that was made in the 1950s. [Full Review in Spanish]

gives no evidence anyone knew [science]

What sounds like a ludicrous exercise in 1950s sci-fi actually turns out to be a fairly involving thriller ... even if there really isn't a monster in the traditional sense.

Menacing SF pic about the dangers of nuclear energy in experiments that take a wrong turn.

Audience Reviews for The Magnetic Monster

There are no featured audience reviews yet. Click the link below to see what others say about The Magnetic Monster!