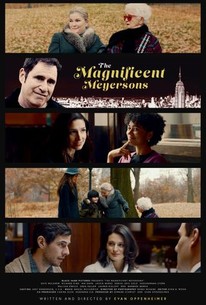 It's a day in New York City just like any other, as the Meyersons deal with the ordinary concerns and petty annoyances that preoccupy all families. Matriarch Terri (Kate Mulgrew) is an oncologist, whose husband (Richard Kind) abandoned the family years earlier, leaving her to raise overachiever Roland (Ian Kahn); Daphne (Jackie Burns), who struggles with her own marriage; Daniel (Daniel Eric Gold), now a reluctant rabbinical student; and Susie (Shoshannah Stern), an ambitious young real estate agent in a lesbian relationship with Tammy (Lauren Ridloff). But the Meyersons' lives are suddenly upended by dramatic revelations both personal and universal. Conversations about faith, fate and the meaning of it all that come to a head at a family dinner with an unexpected guest. As memories of their complicated past collide with a new and uncertain future, the Meyersons must navigate lingering heartbreak and shifting alliances as they are forced to reevaluate everything that they thought was true.

Will Lamparelli
as Street Panhandler

Lila Angert
as Kid in the Park

Sarah Belkas
as Kid in the Park

Mickey Nowakowski
as Kid in the Park
View All

Critic Reviews for The Magnificent Meyersons

I deeply appreciated this very interesting film with a great cast, all doing excellent work.

Deep thoughts into the nature of human existence and what life means have the potential to be juicy and cerebral, but this talky drama is more like a mental maze dripping in drivel.

I'm impressed with the clear effort put forth by Oppenheimer to make the most of what he can control. Except for the one hiccup in the middle, I genuinely appreciate every aspect of this film.

All in all, The Magnificent Meyersons has its merits. If you have a chance to see it, you might be in for a few surprises.

There are no featured reviews for The Magnificent Meyersons at this time.