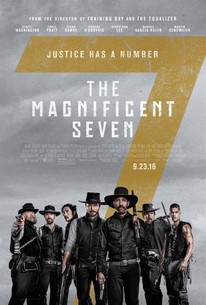 Critics Consensus: The Magnificent Seven never really lives up to the superlative in its title -- or the classics from which it draws inspiration -- but remains a moderately diverting action thriller on its own merits.

Critics Consensus: The Magnificent Seven never really lives up to the superlative in its title -- or the classics from which it draws inspiration -- but remains a moderately diverting action thriller on its own merits.

Critic Consensus: The Magnificent Seven never really lives up to the superlative in its title -- or the classics from which it draws inspiration -- but remains a moderately diverting action thriller on its own merits.

Rob Mello
as Mine Paymaster

Kevin Wiggins
as Another Cowboy

Jackson Beals
as One Eyed Lucas

Critic Reviews for The Magnificent Seven

This new take on The Magnificent Seven boasts another A-list cast, but forsakes characters for bloodless, PG-13 action that entertains without resonating.

As things build toward the long, bloody and by-the-numbers (if ably staged) showdown, it's hard not to mourn for the film this could have been, considering the assemblage of talent.

It's respectful of the past, while it blazes into the future of a genre that is as American as covered wagons.

Most of the time, it feels like Fuqua is just ticking the boxes of the genre conventions, which would be fine if all he was trying to do is make a run-of-the-mill Western TV movie. But this is The Magnificent Seven for god's sake.

The Magnificent Seven is an awkward milestone in Hollywood's ongoing and urgent conversation about representation.

The action scenes are well-staged if deeply impersonal - in fact, much of the film feels rote and mechanical, less a vibrant throwback to vintage Westerns and more a marketing campaign in search of meaning.

Could be leaner and well, maybe not meaner - I would not be surprised if it had the highest body count in a western eve r- but tighter.

The film is little more than a few suspenseful shootouts and a bevy of humorous one-liners.

With popcorn in hand and expectations in check, The Magnificent Seven is here for you to enjoy.

A certain something is missing here, and it could have something to do with the questionable magnificence of some of the title characters.

Audience Reviews for The Magnificent Seven

Of course there had to be a remake of one of the greatest western movies of all times, you can't blame them for trying. And for most of the time, this film works. The characters are interesting enough, the shootouts cool, the story is no straight remake but uses only the basic premise of the original. In the end it just doesn't have the charm, the unique atmosphere and setting of the original. Especially the main bad guy falls short, he's just an asshole, but not particularly threATENING. At least who survives the film is partially surprising. and some shots look really beautiful. The Original is still the far superior film.

The remake of the famed-western doesn't offer up anything revitalizing or innovative to make it superior but does supply enough in its third-act to make for a solid shoot-em-up effort. The Magnificent Seven provides a good amount of action and charm despite its slow start and predictability; regardless, an entertaining flick with a star-drenched team to revel in. 3.5/5

If there is an issue I have with this remake is that these mercenaries become heroes fighting for justice too fast, but all that is compensated by how thrilling and intense it is, with amazing visuals and a production design that makes it look like a true throwback to classic Westerns.