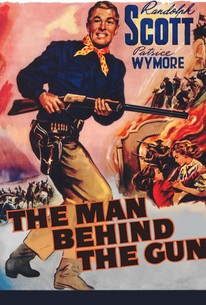 The Man Behind the Gun Photos

Man Behind the Gun is a standard-issue Randolph Scott western elevated by good performances and exciting action sequences. Scott plays Callicut, newly arrived in the bustling mid-19th century metropolis of Los Angeles. Outwardly just another soldier of fortune, Callicut is actually an undercover agent for the government, sent to LA to investigate a covert organization that hopes to make Southern California a separate state. When he finds the time, he romances schoolteacher Lora Roberts (Patrice Wymore), whose life he'd previously saved during a stagecoach holdup. Callicut's rival for Lora's attentions is Roy Giles (Philip Carey), a hotheaded Army captain who may be in on the secessionist movement. Once Callicut finds out who's behind the movement, all hell breaks loose. Robert Cabal makes a brief appearance in Man Behind the Gun as a supposedly harmless Latino who turns out to be firebrand desperado Joaquin Murietta. ~ Hal Erickson, Rovi

Reed Howes
as Roberts aka The Dude

Critic Reviews for The Man Behind the Gun

Routine Western elevated by the presence of Randolph Scott.

There are no featured reviews for The Man Behind the Gun at this time.

The Man Behind the Gun Quotes