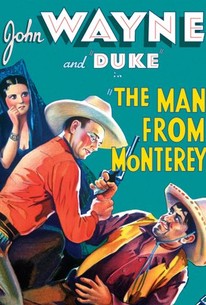 The Man from Monterey Photos

The Man From Monterey was the last of John Wayne's "B"-westerns for Warner Bros. The Duke plays U.S. army captain John Holmes, dispatched to Monterey to convince the ranchers to register their long-standing Spanish land grants, lest their property fall into the hands of undeserving strangers. This makes Holmes the enemy of local land swindler Don Luis Gonzales (Donald Reed), who has been plotting to grab up all the acreage for himself. Holmes must race against time to prevent Gonzales from achieving his goal by marrying Dolores (Ruth Hall), the daughter of the richest landowner (Lafe McKee) in the territory. John Wayne looks most uncomfortable in his ill-fitting army uniform and fancy-dancy Mexican duds -- but no more uncomfortable than Ken Maynard, who appears in the silent stock footage which is spread throughout The Man From Monterey.

Jim Corey
as Soldier
View All

Critic Reviews for The Man from Monterey

One of the lamest Westerns ever for John Wayne.

There are no featured reviews for The Man from Monterey at this time.

The Man from Monterey Quotes