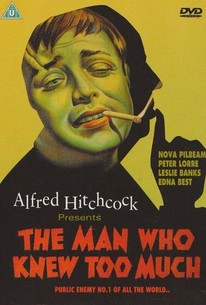 The Man Who Knew Too Much Photos

While vacationing in Switzerland, Britons Leslie Banks and Edna Best befriend jovial Frenchman Pierre Fresnay. Not long afterward, Fresnay is murdered. He whispers a secret in Banks' ear before expiring. This is witnessed by several sinister foreign agents, who kidnap Banks' daughter to keep him from revealing what he knows.

News & Interviews for The Man Who Knew Too Much

View All The Man Who Knew Too Much News

Critic Reviews for The Man Who Knew Too Much

The story is told in sharp, abbreviated sequences gathering speed steadily toward their explosive climax, makes The Man Who Knew Too Much one of the neatest melodramas of the year.

This is a suberbly structured thriller whose excellence is aided and abetted by a spirited cast.

Although the film is fast and consistently clever, it is more deeply flawed than any other Hitchcock film of the period, failing to find a thematic connection between its imaginative set pieces.

Directed with a fascinating staccato violence by Alfred Hitchcock, it is the swiftest screen melodrama this column can recall.

The acting is for the most part simple and straightforward, but there is real subtlety in the performance of Peter Lorre, the Dusseldorf murderer of M, as the anarchist leader.

A sort of British G-Men plot, proving that calmness in crisis is more terrific as a suspense medium than the constant rattle of machine guns.

Peter Lorre's performance as a sort of undercover Napoleon working blandly to stand Europe on its head, is one of the most brilliant screen achievements of the year.

One of Hitchcock's most unfairly overlooked accomplishments - a hidden gem in one of the cinema's most legendary careers.

I prefer stronger meat in this type of picture, but there are good performances from Edna Best, Leslie Banks and Frank Vosper.

Despite the child kidnapping, assassination plot, and relatively high body count, this primarily plays like a comedy.

Audience Reviews for The Man Who Knew Too Much

Thoroughly English in DNA and execution, this early Hitchcock presents a unusual couple who find themselves embroiled into some kind of mysterious and insidious spy plot. Peter Lorre is our Germanic bad guy whose politeness comes and goes erratically and is truly menacing for that. The set-up for the action involved is as questionable as it comes, but the payoff, a gunfight in downtown London, is worth the price of admission alone. As well, this work, along with Jamaica Inn, cements my growing suspicion that Hitch's best was his earlier stuff.

Hitchcock was still learning his craft and improving his directing skills when he made this unimpressive and thematically flawed film that even he disliked - and the humor eliminates most of the tension while the weak script has villains whose motivations are never really clear.

This is basically the film that really saw Hitchcock's film career take off and become something grand. It has his real breakout hit, and even had the distinction of being remade (by Hitchh imself), in a version that a number of people say is far superior. I haven't seen that one yet, but I plan to. The plot concerns a man who, after learning of some dire news concerning an upcoming assassination, finds his daughter kidnapped by some people who witnessed him learning of their diabolical plot. The film then shifts to him trying ot rescue his daughter on his own as well as to stop the planned killing from taking pace. This is fast paced and familiar Hitch, but it all a lot of fun, and pretty well done. For what it's worth, it also features the English language debut of Peter Lorre, and he does quite a decent job here. All in all, this is a pretty decent way to spend 75 minutes, and there's a lot of good set pieces and moments that amp up the suspense and entertainment value. Give it a go.

The Man Who Knew Too Much Quotes