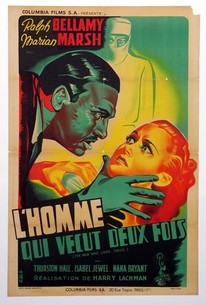 The Man Who Lived Twice Photos

In this interesting drama, a disfigured fugitive killer gets a second chance at life when he hides out in a hospital and overhears a doctor discussing his innovative scientific theories. The murderer accosts the doctor and forces him to perform a radical surgery that will change the criminal's face and brain and make him into a better person. Using a new name, the crook becomes a top doctor. Unfortunately, he could change his face, but he could not flee his past and he finds himself standing trial and getting convicted. He is later pardoned by the governor.

Critic Reviews for The Man Who Lived Twice

It's farfetched but fairly interesting.

There are no featured reviews for The Man Who Lived Twice at this time.

The Man Who Lived Twice Quotes