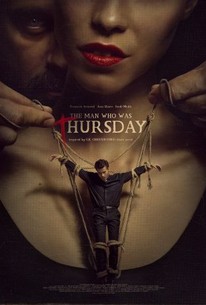 The Man Who Was Thursday Photos

The Man Who Was Thursday is a metaphysical thriller chronicling Father Smith's Faustian descent into the Roman underworld. Following a disgraceful turn at his local parish Father Smith is called to Rome for spiritual rehabilitation. Upon his arrival, Charles, the man who introduced him to the faith, reveals the real reason Smith was brought to the Eternal City; to go underground and ascertain the mysterious leader of an anarchist group of renegades, whose leaders are each code-named after the days of the week. Smith accepts this mission and ultimately unearths the true leader of the group, but not before experiencing a litany of mind-bending twists and turns.

Critic Reviews for The Man Who Was Thursday

Newcomers to the source will certainly enjoy this one, as I did.

Setting fascism against freedom, and hiding the devil in its details, this feature debut is an ambitious, sophisticated passion play that leaves Ron Howard's dumb-assed The Da Vinci Code (2006) in its dust.

There are no featured reviews for The Man Who Was Thursday at this time.

The Man Who Was Thursday Quotes