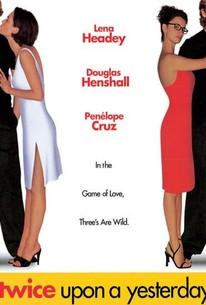 Maria Ripoll made her feature directorial debut with this witty Spanish-British romantic comedy, set in London, where actor Victor (Scottish actor Douglas Henshall) is drunk and upset over former girlfriend Sylvia (Leana Headley) and her upcoming marriage in 48 hours to Dave (Mark Strong). In the rain, the wet and drunk Victor meets two Spanish sanitary workers, Don Miguel (Eusebio Lazaro) and Rafael (Gustavo Salmeron), and their Spanish poetry quotes cue special effects and time travel. Tossed back in time, Victor is now able to begin a relationship replay with Sylvia, so he immediately begins an effort to keep her from meeting Dave. The situation gets sticky, however, when he drops into a local pub and meets gorgeous barmaid Louise (Spanish actress Penelope Cruz). London locations show activities during the Notting Hill carnival. Shown at the 1998 Cannes Film Festival. ~ Bhob Stewart, Rovi

Twice Upon a Yesterday has the kind of title that promises you'll hate the movie, and in this case the movie doesn't disappoint.

Without a rooting interest in our so-called 'hero,' one admires the invention of the film without necessarily enjoying it.

[A] lively, if diverse, directing debut.

Though the start of the movie was a little slow, by the end I was invested in the characters. I really liked the changing twists of fate...the plot starts like so many others but has a wonderful twist of its own that I had not yet seen done. Wonderful! Great acting, great filming and editing, and great locations. I really liked it...especially nice ending. Chick flick? Probably...

i know this as 'if only' but still doesnt make it any better.... its ok i guess but pretty boring not much of a storyline and a bit unbelievable