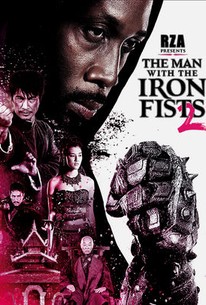 When Thaddeus (RZA) is found badly wounded near a 19th-century Chinese town, miner Li Kung (Dustin Nguyen) and his wife Ah Ni (Eugenia Yuan) offer him refuge. As he heals, he becomes entrenched in a conflict that pits the townsfolk against the evil Master Ho (Carl Ng), his nefarious Beetle Clan and the terrifying Lord Pi (Cary-Hiroyuki Tagawa). With Thaddeus at his side, the mild-mannered Kung transforms into a deadly warrior in this martial arts epic.

Critic Reviews for The Man with the Iron Fists 2

It has neither the colorful flair of authentic Hong Kong martial arts movies, nor the first Man With The Iron Fists' over-stuffed pastiche of the same.

Some advice to RZA: Stick to your music. Dude, your screenwriting abilities are extremely limited.

Audience Reviews for The Man with the Iron Fists 2

A poor man's version of Kill Bill but I had a soft spot for the original so I enjoyed this.

The Man with the Iron Fists 2 Quotes