The Marriage of a Young Stockbroker (1971) 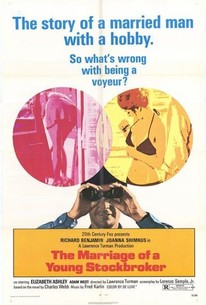 A man who can't stop looking at other women finds that it might cost him his marriage in this farcical comedy. William and Lisa Alren (Richard Benjamin and Joanna Shimkus) are a young married couple whose relationship has begun to go stale. Bored and looking for diversion, William begins spying playfully on the sexual habits of their neighbors and watching attractive women passing by; while his voyeurism falls short of criminal activity, it doesn't sit at all well with Lisa. Eventually, she becomes so troubled by William's roving eye that she leaves their home and moves in with her sister Nan (Elizabeth Ashley), a harridan who has verbally browbeaten her attorney husband Chester (Adam West) into submission. At Nan's insistence and with Chester's help, Lisa begins divorce proceedings against William, but he tries to convince her to give him another chance.

Tiffany Bolling
as Girl in the Rain

Critic Reviews for The Marriage of a Young Stockbroker

The reason Marriage of a Young Stockbroker doesn't work, I imagine, is that it doesn't start from scratch in getting into the mind of its protagonist.

Maybe it's true that no one starts out to make a bad movie, but surely no one must have thought this one to be very good to begin with.

There are no featured reviews for The Marriage of a Young Stockbroker at this time.

The Marriage of a Young Stockbroker Quotes