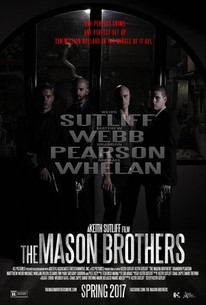 A skilled group of brothers and bank robbers plan a bank heist for ten million dollars at a local bank in downtown Los Angeles. A normal bank job is done in just under three minutes. While at the bank the brothers encounter the most unexpected set up resulting in the death of one of the brothers. The leader and oldest of the brothers, Ren Mason (Keith Sutliff), hires a bounty hunter, Jerry (Tim Park), to investigate and find out who set them up at the bank resulting in interrogations, shootouts, and betrayal. The path leads the brothers to the source behind the mayhem.

Carlotta Montanari
as Allena
View All

Critic Reviews for The Mason Brothers

A talky, drawn-out crime thriller that's big on posturing but comes up empty in the delivery of convincing dramatic goods.

There are no featured reviews for The Mason Brothers at this time.