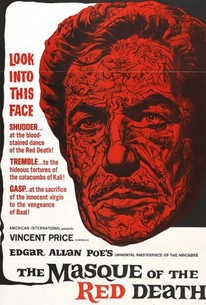 A European prince terrorizes the local peasantry while using his castle as a refuge against the "Red Death" plague that stalks the land.

John Westbrook
as Man in Red

Sarah Brackett
as Grandmother
View All

Critic Reviews for The Masque of the Red Death

In the end, this is a gothic tale of two vying dominions, one ruled by an effete, debauched man whose perverse pleasures are entirely earthbound, the other unworldly, undeniable, undefiable, or in a word (quoted directly from Poe's text) illimitable

The Masque of the Red Death moves with a sinuous, unselfconscious elegance.

This one works on a lot of levels.

...a revelation in this restoration...

A moment of genuine brilliance from Corman, a master class in villainy by Vincent Price, and a reminder of the enduring power of Poe's work.

The film shows its evil characters as some of the most twisted seen in the cycle, and their fate is always "forgotten" by Prospero's mocking laughter. [Full Review in Spanish]

Perhaps the best of the Poe-Corman-Price pics, with Vincent delivering a potent performance as Prince Prospero.

There's an inherent danger in filling in all the gaps of a story whose power lies in its omissions.

Audience Reviews for The Masque of the Red Death

Price is at his most diabolical here, while the stunning sets, costumes and cinematography help create an entrancing Gothic atmosphere in this which is most certainly the best adaptation made by Roger Corman of a Poe story.

A well done adaptation by Corman, with good ol Vincent in the lead role.

From the MGM Midnite Movie Collection, this film produced by Alta Vista Productions in 1964 must have entertained many a people at the Drive In's across America. Vincent Price gives a stellar performance as Prince Prospero. as does Hazel Court who plays the beautiful Juliana. The film itself is about a plague that invades the Village of Cantina and the Prince takes wealthy into his castle for protection and to torment. Only let down was a young actress who played a ballerina and the voice was duped in. But picture story wise a 4 star film, and one of the better from the MGM Midnite collection.

The Masque of the Red Death Quotes