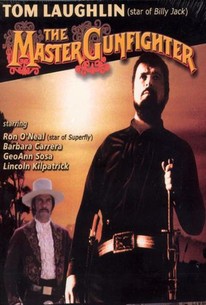 After the success of his three Billy Jack films, actor, director, and screenwriter Tom Laughlin decided to expand his range a bit with this Western, which was adapted from Goyokin, a popular Japanese samurai film. However, since Finley (Laughlin's character here) is trained in martial arts and often defends himself (and others) by violence, while frequently espousing a nonviolent philosophy, it could be said that this wasn't much of a stretch for the once and future Billy Jack. Don Santiago (Richard Angarola) is a vicious man who helps provoke an Indian massacre that will allow him to steal the Indians' land and claim it as his own. However, his son-in-law, Finley (Tom Laughlin), is an expert hand with both guns and swords and will not allow him to push around the peace-loving Indians or fellow settlers of the West. The supporting cast features Ron O'Neal and Barbara Carrera, who received a Golden Globe nomination for her work in this film. As with his first two films, Tom Laughlin directed The Master Gunfighter but didn't take screen credit, in this case listing the director as Frank Laughlin, who happened to be Tom's son.

Critic Reviews for The Master Gunfighter

I don't think there's any way an intelligent moviegoer could sit through this mess and accurately describe the plot afterward.

Audience Reviews for The Master Gunfighter

There are no featured audience reviews yet. Click the link below to see what others say about The Master Gunfighter!