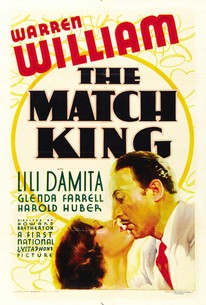 The Match King was inspired by the checkered career of entrepreneur Ivar Krueger. Warren William plays a Krueger-like businessman who takes over a bankrupt Swedish match factory, then lies his way into getting corporate backing for the operation. With little regard for ethics, William purchases all existing match patents, ultimately monopolizing the industry. Ruining lives and breaking laws all over Europe, William is himself emotionally devastated when betrayed by a glamorous actress (Lily Damita). Shortly afterward, William's business empire crumbles during the worldwide Depression, and the onetime Match King commits suicide.

Critic Reviews for The Match King

There are no critic reviews yet for The Match King. Keep checking Rotten Tomatoes for updates!

There are no featured reviews for The Match King at this time.