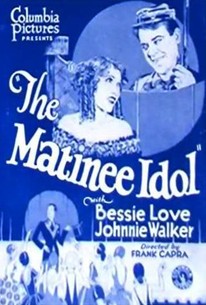 For many years considered a "lost" Frank Capra silent, The Matinee Idol was restored in the mid-1990s to very nearly its entire 60-minute length. Johnnie Walker is cast as brash Broadway star Don Wilson, who out of boredom takes a leave of absence from his latest show and heads to the boonies. Here he stumbles across a threadbare theatrical stock company run by Ginger Bolivar (Bessie Love) and her father, Col. Jaspar Bolivar (Lionel Belmore). Smitten by Ginger, Don assumes a phony name and takes a job as a bit player in the Bolivar Stock Company's latest production, a dreadful Civil War drama. Amused by the sincerity of the provincial actors, Don secretly arranges for the troupe to be hired to perform in his own Broadway revue. On the night of their New York debut, the troupe's "high drama" is greeted with hoots of derisive laughter and celebrated as the comedy hit of the year. But Ginger, understandably humiliated, walks off the stage -- and upon finding out Don's true identity and his complicity in the proceedings, she walks out on him as well. Realizing that he's carried the joke too far, the now-contrite Don breaks his Broadway contract and seeks out Ginger's forgiveness, which of course she provides in abundance during the climactic clinch. Frank Capra later claimed that Matinee Idol represented the first time he was able to successfully combine broad comedy with a tender romance, though the film works far better on a comic level than it does as a love story (especially amusing are the close-ups of the Bolivar Stock Company's hayseed audience). Matinee Idol was remade in 1936 as The Music Goes 'Round and 'Round.

Critic Reviews for The Matinee Idol

There are no critic reviews yet for The Matinee Idol. Keep checking Rotten Tomatoes for updates!

There are no featured reviews for The Matinee Idol at this time.