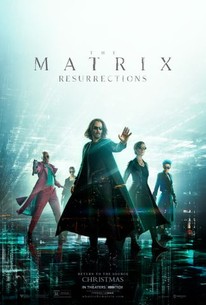 Critics Consensus: If it lacks the original's bracingly original craft, The Matrix Resurrections revisits the world of the franchise with wit, a timely perspective, and heart.

Critics Consensus: If it lacks the original's bracingly original craft, The Matrix Resurrections revisits the world of the franchise with wit, a timely perspective, and heart.

Critic Consensus: If it lacks the original's bracingly original craft, The Matrix Resurrections revisits the world of the franchise with wit, a timely perspective, and heart.

Co-written and directed by Lana Wachowski, this sci-fi thriller series sequel revisits Neo (Keanu Reeves), who seems to be feeling disconnected from his reality as he discusses his personal issues with a therapist-like Analyst (Neil Patrick Harris). As he's also apparently taking some blue pills, old characters from his past start reappearing, offering him a red pill and some missing truths about his actual reality. Carrie-Anne Moss co-stars as Trinity, with Yahya Abdul-Mateen II as Morpheus and Jada Pinkett Smith as Niobe.

Neil Patrick Harris
as The Analyst

Lambert Wilson
as The Merovingian

Dani Swan
as Woman in Red

News & Interviews for The Matrix Resurrections

View All The Matrix Resurrections News

Critic Reviews for The Matrix Resurrections

A personal vision writ extremely large, with a still-singular graphic splendor and juicy themes of identity, consent, and the limits of conspiratorial thinking.

It honors the legacy, but it feels more mature and lived-in.

I enjoyed thinking of this film more as a form of media criticism than I enjoyed watching it as a movie.

Effortful explanations of original characters' reincarnation by different actors mix with sluggish world-building and reflexive riffs on fiction, reality, and nostalgia. What's more, the action is routine; the sense of wonder is missing.

Matrix Revolutions was supposed to be the finale. It's good that it was not. Will Matrix Resurrections be the end? Maybe, maybe not. Fans will hope the star keeps checking his text messages.

With one exception, the action sequences in Resurrections are plentiful but perfunctory, as though Wachowski were fulfilling a contractual obligation. Instead, the movie's pulse resides with the characters and the feelings that flow between them.

Wachowski's ability to poke fun at Hollywood's sequel industrial complex falls flat in the midst of a film that is itself not very entertaining.

Everything in the middle had a contemporary TV feel, in which old IP was rebooted for a Riverdale-in-Captain-Nemo's-submarine effect that struck me as counter to the aims of the film but was also just being nice to kids.

It's an amorphous blob of a movie, full of sleepy action scenes and scatterbrained philosophical one-liners.

As good as it is at times, you can't quite shake the feeling that it is all profoundly unnecessary.

Twenty-two years and many knockoff movies later, the novelty of the first film's gravity-defying fights is long gone.

Matrix: Resurrections just about manages to hold your interest but, as much of it is rehashing what came before without really adding much until the final act, it's difficult to get too excited.

There are no featured reviews for The Matrix Resurrections at this time.