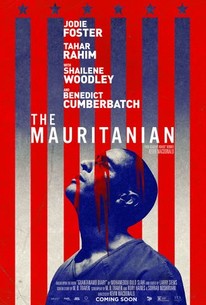 Critics Consensus: The Mauritanian takes a frustratingly generic approach to a real-life story that might have been inspirational in other hands, but Tahar Rahim's performance elevates the uneven material.

Critics Consensus: The Mauritanian takes a frustratingly generic approach to a real-life story that might have been inspirational in other hands, but Tahar Rahim's performance elevates the uneven material.

Critic Consensus: The Mauritanian takes a frustratingly generic approach to a real-life story that might have been inspirational in other hands, but Tahar Rahim's performance elevates the uneven material.

Directed by Kevin Macdonald and based on the NY Times best-selling memoir "Guantánamo Diary" by Mohamedou Ould Slahi, this is the inspiring true story of Slahi's fight for freedom after being detained and imprisoned without charge by the U.S. Government for years. Alone and afraid, Slahi (Tahar Rahim) finds allies in defense attorney Nancy Hollander (Jodie Foster) and her associate Teri Duncan (Shailene Woodley) who battle the U.S. government in a fight for justice that tests their commitment to the law and their client at every turn. Their controversial advocacy, along with evidence uncovered by a formidable military prosecutor, Lt. Colonel Stuart Couch (Benedict Cumberbatch), uncovers shocking truths and ultimately proves that the human spirit cannot be locked up.

Darron Meyer
as Bob the Spy

Lionel Strasky
as Lawyer on Plane

Nancy Hollander
as Self

News & Interviews for The Mauritanian

View All The Mauritanian News

Critic Reviews for The Mauritanian

Filmed largely indoors and in often claustrophobic spaces, the movie isn't always subtle, but its impact is felt particularly in the scenes featuring Rahim. His powerful performance is supported respectfully by Foster, Cumberbatch and Woodley.

The subject is charismatic in a way that the film is not. But he is VERY charismatic, and it's his performance that sees this through.

Few viewers will find themselves unengaged during The Mauritanian, but there are too many middlebrow beats either side of the jarring chords.

Macdonald and his producers and writers wanted too much... The result? A bland smattering of each that teases us with the possibility of complex roles.

The film's power lies in its direct confrontation with the ideology that underpinned it all... The Mauritanian is notable, too, for how much of its perspective is actually granted to Salahi.

Strong rather than spectacular.

While it is an Important Drama (and reminiscent of 'The Life of Emile Zola'), it feels far too long after its time to have its intended impact.

Taher Rahim is a fine actor. [Full review in Spanish]

Foster and Rahim deliver excellent performances that are the best reason to watch this film.

An entirely new level of revenge born of the attacks on the World Trade Center.

It's a solid offering with exceptional performances from both Jodie Foster and Tahir Rahim that leaves its audience wanting a retaliation that never arrives.

There are no featured reviews for The Mauritanian at this time.