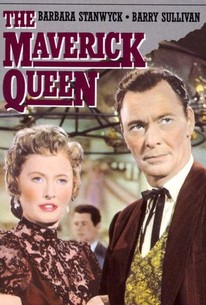 Based on a Zane Grey novel published over a decade after the author's death, The Maverick Queen stars Barbara Stanwyck in the title role. As head of the outlaw gang called The Wild Bunch, Kit Banion (Stanwyck) wreaks havoc on the banks and railroads of the West. Pinkerton detective Jeff (Barry Sullivan) infiltrates the gang, falling in love with Kit along the way. Inevitably, one of the main characters expires in the other's arms, bringing this thrilling western to a poignant conclusion. Of interest to western buffs are the decidedly unsympathetic portrayals of gang members Butch Cassidy (Howard Petrie) and the Sundance Kid (Scott Brady). In the manner of High Noon, the film's continuity is tied together with a western ballad, written by Ned Washington and Victor Young and sung by Joni James. The Maverick Queen was Republic's first widescreen effort, lensed in a now-forgotten process called Naturama.

Jim Davis
as A Stranger

Jack O'Shea
as Waiter
View All

Critic Reviews for The Maverick Queen

There are no featured reviews for The Maverick Queen at this time.