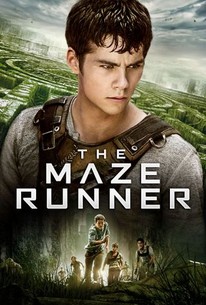 Critics Consensus: With strong acting, a solid premise, and a refreshingly dark approach to its dystopian setting, The Maze Runner stands out from the crowded field of YA sci-fi adventures.

Critics Consensus: With strong acting, a solid premise, and a refreshingly dark approach to its dystopian setting, The Maze Runner stands out from the crowded field of YA sci-fi adventures.

Critic Consensus: With strong acting, a solid premise, and a refreshingly dark approach to its dystopian setting, The Maze Runner stands out from the crowded field of YA sci-fi adventures.

When Thomas wakes up trapped in a massive maze with a group of other boys, he has no memory of the outside world other than strange dreams about a mysterious organization known as W.C.K.D. Only by piecing together fragments of his past with clues he discovers in the maze can Thomas hope to uncover his true purpose and a way to escape. Based upon the best-selling novel by James Dashner. (c) Fox

Will Poulter
as Gally

Critic Reviews for The Maze Runner

As director Wes Ball builds the eeriness around the complex entrapment of a community of boys living a Lord Of The Flies type existence, he is ably aided by imaginative and well-executed production design and special effects.

Trying desperately to focus on the themes of free will, responsibility and death (several major characters have a gruesome fate), all I could think about was cheap vodka.

In the annals of dystopian young-adult franchises, The Maze Runner is less than totes amazeballs.

Yet more celibate chiselled hotties in some ritualised game-playing future world, who discover that they are in some super-special way different, or divergent, or exceptional.

Makes comments about the dangers of conformity and the virtues of bravery and loyalty and does appear to be headed into some twisty-turny territory should the next part of the story get made.

Smarter than most, thematically interesting, and unique enough to make it stand out in a crowded landscape.

Logic and any adherence to common sense falls to the wayside.

Cameron Ward
One Room With A View

Despite its familiar tropes, the film boasts a strong cast, numerous heart-in-mouth action moments, and a truly terrifying monster... making it a solid and thoroughly enjoyable little adventure story.

It's intriguing enough that I'm now anticipating the next installment, The Scorch Trials.

Audience Reviews for The Maze Runner

All of these youth franchise efforts start to blend together to me. Young antihero. Fight against the oppressive powers that be. As cookie cutter as some of the worst of the westerns used to be. If yer gonna do the genre couldn't ya at least have more'n one pitch? This outing offers nada fresh. Yawn.

A bunch of running around to what purpose? And why does everything have to be so damned dark!

Totally fine. Is that enough to say about this movie? Yes. Yes it is.

It's "The Hunger Games" mixed with "Lord of The Files"... except that any message it might have is missing due to the open-ended and unsatisfying conclusion. For those like me who have not read the books, you will feel frustrated by the lack of answers or clear hints about where it's all going. Nevertheless, the film was exciting at times, it's set in an intriguing world I'd like to know more about, and I found Dylan O'Brien's quite likable.