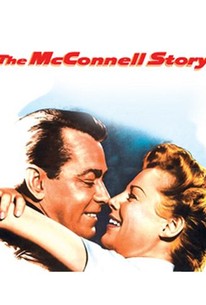 Alan Ladd plays real-life air force hero Captain Joseph McConnell Jr. in this inspirational biopic, while June Allyson does her usual as McConnell's anxious, waiting-nervously-at-home wife. Assigned to the medical corps during WWII, McConnell takes private flying lessons so that he'll qualify for pilot duty. After serving with distinction in the war, McConnell becomes a pioneer in the testing of jet aircraft. The film ends when McConnell dies while testing a new Sabre Jet. If June Allyson seems genuinely broken up upon learning of her screen husband's death, it may be because the real Captain Joseph McConnell died only a few weeks before filming started on The McConnell Story, necessitating a hurriedly rescripted ending.

Vera Marshe
as Blonde
View All

Critic Reviews for The McConnell Story

There are no critic reviews yet for The McConnell Story. Keep checking Rotten Tomatoes for updates!

There are no featured reviews for The McConnell Story at this time.