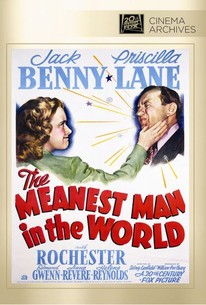 The Meanest Man in the World Photos

The old George M. Cohan theatrical chestnut The Meanest Man in the World was retailored for the screen to accommodate the talents of Jack Benny and Eddie "Rochester" Anderson. Benny plays small-town lawyer Richard Clark, whose soft-heartedness and sense of justice loses him case after case. Threatened with bankruptcy, Clark is open to the suggestions of his valet Shufro (Rochester), who advises his boss to become cold-blooded and nasty. This he does through a series of subterfuges, including having himself photographed stealing candy from a baby and foreclosing on a little old lady (though he actually hides the old dear in his office, tending to her every need). Not unexpectedly, business picks up tremendously, but Clark's sweetheart Janie (Priscilla Lane) is upset by the "change" in her boyfriend and walk out on him. It's up to Janie's father (Matt Briggs) to tie up loose ends-literally. Despite a brief 57-minute running time (the result of retake problems during production), Meanest Man in the World secured top-of-the-bill bookings thanks to Jack Benny's radio popularity. And yes, that is Tor Johnson in the final shot. ~ Hal Erickson, Rovi

Critic Reviews for The Meanest Man in the World

We could say, to some extent, this film is antiquated... But old-fashioned or not, it amuses. [Full review in Spanish]

Audience Reviews for The Meanest Man in the World

Take the Jack Benny show, cut out all the fat, and waddaya got? Benny and Rochester, sparring against and for each other, which brings us to this quick little gem about a cheap but warmhearted lawyer (its a fantasy) acting mean and lowdown cause people seem to like lawyers that way. Unfortunately, the racial attitudes of those days very nearly overcook this duck, but the chemistry of the two leads manages to survive even that. Worth looking for.

The Meanest Man in the World Quotes