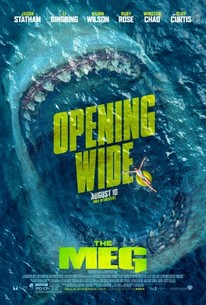 Critics Consensus: The Meg sets audiences up for a good old-fashioned B-movie creature feature, but lacks the genre thrills -- or the cheesy bite -- to make it worth diving in.

Critics Consensus: The Meg sets audiences up for a good old-fashioned B-movie creature feature, but lacks the genre thrills -- or the cheesy bite -- to make it worth diving in.

Critic Consensus: The Meg sets audiences up for a good old-fashioned B-movie creature feature, but lacks the genre thrills -- or the cheesy bite -- to make it worth diving in.

A deep-sea submersible--part of an international undersea observation program--has been attacked by a massive creature, previously thought to be extinct, and now lies disabled at the bottom of the deepest trench in the Pacific... with its crew trapped inside. With time running out, expert deep sea rescue diver Jonas Taylor (Jason Statham) is recruited by a visionary Chinese oceanographer (Winston Chao), against the wishes of his daughter Suyin (Li Bingbing), to save the crew--and the ocean itself--from this unstoppable threat: a pre-historic 75-foot-long shark known as the Megalodon. What no one could have imagined is that, years before, Taylor had encountered this same terrifying creature. Now, teamed with Suyin, he must confront his fears and risk his own life to save everyone trapped below.

Olafur Darri Olafsson
as The Wall

Tawanda Manyimo
as Marks
View All

News & Interviews for The Meg

The Year in Review: The Biggest Stories from the Movies, TV, and Streaming in 2018
18 Rotten Movies We Loved from 2018
Weekend Box Office Results: The House With a Clock in Its Walls Strikes No. 1 With $26.8 Million

View All The Meg News

Critic Reviews for The Meg

There's some corniness that's apart of this film, there are some cheesy lines, but Statham sells it all.

Asks little more of you than to strap in, put away your phone and enjoy watching a freakishly huge prehistoric eating machine terrorize some scientists before it turns its appetite to a beach full of frolickers on floaties.

...exactly what we paid for.

The one genuine shock is that it takes Statham as long as 44 minutes to remove his shirt and flash his pecs.

The Meg is one of the summer's most fun, most mindless blockbusters, a shark vs. human movie that doesn't stand up to close scrutiny but is enjoyably dumb.

Succeeds because it knows exactly what it is and doesn't try to be more than that.

Its tagline is 'Pleased to eat you.' There is no need for a review. You know exactly what you're getting into here but, because I am paid by the word, here we go.

The megalodon itself is nicely designed, managing not to change sizes too frequently as it lunges over boats or swims underneath vacationers in inflatable tubes.

The Meg is a trite and stereotypical mess that is often too silly and predictable for its own good.

Stay home and watch Jaws instead.

Audience Reviews for The Meg

A very basic monster movie that begins fun enough but then quickly overstays its welcome, becoming big and clumsy like a Megalodon while lacking in tension, thrills or anything to hold our attention for more than an hour as things start to get repetitious, lame and purely boring.

Remember that super colossal huge shark movie that changed everything about watching summer films? No, not that one. And not that other one. Man, there's been a lot of shark movies! The first one. Yeah, that's the one. Jaws. Well this movie takes your money and asks you the very same question I just asked you. Takes your money. Well do you remember? Do ya, punk? Well, this ain't that movie. But it does remind you of it.