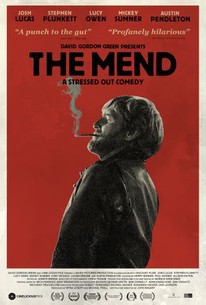 Critics Consensus: Bolstered by an outstanding performance from Josh Lucas, The Mend finds fresh insights in a familiar tale of familial dysfunction.

Critics Consensus: Bolstered by an outstanding performance from Josh Lucas, The Mend finds fresh insights in a familiar tale of familial dysfunction.

Critic Consensus: Bolstered by an outstanding performance from Josh Lucas, The Mend finds fresh insights in a familiar tale of familial dysfunction.

Routinely estranged brothers Mat (Josh Lucas) and Alan (Stephen Plunkett) are equally unhappy, but the former embraces chaos and rudeness while the latter conceals his discontent. With both their lives on a downhill slide, Mat and Alan are temporarily reunited as roommates, uneasily sharing a Harlem apartment. Judd Greenstein and Michi Wiancko's bracingly modernist score sets the tone for this Arnaud Desplechin-esque study of shared familial dysfunction, brimming with smart, hostile talk aggressively filmed by writer-director John Magary.

Karin Fagerblom
as Dancer at Party

Kiran Rhe
as Dancer at Party

Anais Fifer
as Dancer at Party

Rodrigo Meireles
as Couple and Baby

Niki Rubin
as Couple and Baby

Gaia Meireles
as Couple and Baby

Jessica May
as Film Crew

Markus Kirschner
as Embracers on Subway

Peter Smith
as Embracers on Subway

Bree Perry
as Passenger in Car

Charles Coleman
as Patron in Front of Bar

Jared Mills
as Friend of Cigarette Man
View All

News & Interviews for The Mend

View All The Mend News

Critic Reviews for The Mend

The Mend lacks true mayhem or insight, resulting in a repeating scherzo without a coda.

"The Mend" meanders from situation to situation, turning itself in the process into a wallow of dysfunction. And a claustrophobic wallow at that.

Sharp dialogue and strong performances tumble around this ill-defined story like shoes in a dryer.

"The Mend," about a pair of oil-and-water brothers in free fall, is by turns opaque, harsh, self-aware, indulgent and wickedly funny. It's never dull, pummeling you with its prickly smarts.

The Mend finds the truths that bind families together, but it knows that everyone has to hack their own path to get there.

Takes what could have easily been a mundane tale of brotherly dysfunction and turns it into something abstract and electrifying.

An NYC-based comedy of ill manners that exudes weird, nervous energy from the opening seconds and never relents. I couldn't shake this film - it persisted in my mind like a stubborn houseguest.

It's as if Ingmar Bergman and the Safdie brothers got together to make a movie. However you define it, it's quite wonderful

It's a consistently wonderful, occasionally astonishing, deservedly moving piece of film craft layered on top of a screamingly funny screenplay.

"It is a gloriously entertaining film that gives some terrific actors plenty to gnaw on. And they get unnervingly close to the bone."

The Mend feels raw and real, as though it's remaking the world in front of our eyes. You need to see this movie.

The Mend is a refreshingly genuine film, fueled by infectious energy and the coarsest of humor.

Audience Reviews for The Mend

There are no featured audience reviews yet. Click the link below to see what others say about The Mend!