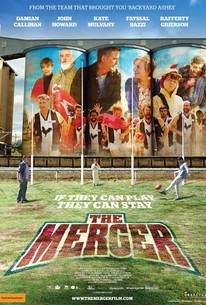 Bodgy Creek is a struggling town. The drought won't let up, jobs are scarce after the mill was shut down, and the footy team looks like it will have to merge with anoher club or fold. Living a hermit-like existence on the town's fringe, former football star turned 'Town Killer' Troy Carrington (Damian Callinan), is coaxed into rescuing the team after striking up an unlikely friendship with young Neil (Raffety Grierson) who is struggling with the recent loss of his father. Teaming up with Neil's mum Angie (Kate Mulvany, The Great Gatsby) who runs a nearby refugee support centre, they unite to recruit the new arrivals to save the team and take the community on a journey of change. But for some, like Neil's grandfather and Club President, Bull (fan-favourite, John Howard, SeaChange) and 'star' player Carpet Burn (Angus McLaren, Hotel Mumbai), it's more change than they're willing to take.

Critic Reviews for The Merger

It's not mountain-moving stuff, but nor is it devoid of care and consideration. The Merger is well made play-to-the-bleacher-seats entertainment.

Succeeds as a personable and entertaining social comedy playing from the left-field.

Just as Australia's current coalition government nominated Scott Morrison as their leader; a man who has a boat-shaped sculpture in his office that proclaims "I stopped these"; a movie embracing humanity like "The Merger" is right on time.

There's no question the film, directed with careful attention not to offend by Mark Grentell, has its heart in the right place as the film bounces around the idea of accepting people of other lands into the community. If only the film was funnier.

A by-the-numbers affair brightened up by palatable packaging and palpable passion - and with ample charm in its crowd-pleasing vibe and its cause.

This is the Full Monty for the Footy field.

The frustratingly inert direction of Mark Grentell... also smothers a lot of the goodwill you may wish to extend towards The Merger.

Australian comedies are always a dubious lot and this is no different, with few laughs, endless dinkum Ockerisms, a calculatedly crowd-pleasing edge and well-meaning messages that are virtually tackled to the ground and beaten senseless.

The Merger has a massive heart, and it's unequivocally in the right place.

I left The Merger in a reverie, charmed by this latest great Australian comedy about identity, which deserves to go straight to the pool room alongside The Castle and, more recently, Ali's Wedding.

Audience Reviews for The Merger

There are no featured audience reviews yet. Click the link below to see what others say about The Merger!