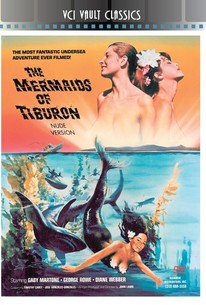 The Mermaids of Tiburon Photos

Alluring but mysterious females come to rescue of a man on a mission in this beautifully photographed underwater adventure. Dr. Samuel Jamison (George Rowe) is a marine biologist on the staff at an aquatic theme park who one day receives a visit from an elderly gentleman named Ernst Steinhauer (John Mylong). Steinhauer shows Jamison some remarkable specimens of "flame pearls," rare jewels of the sea that change color in a prismatic fashion, which he discovered during a recent visit to the island of Tiburon; he wants to know more about them and invites Jamison to his home to discuss his find. However, when Jamison pays Steinhauer a visit, he finds the place ransacked, the pearls gone and old man missing. Jamison charters a boat to Tiburon in search of the pearls, but he's not the only one who knows about the treasure; Milo (Timothy Carey), a vicious gangster, stole Steinhauer's maps and killed the old man, and is now sailing to Tiburon to claim the valuables. Jamison discovers the pearls are being guarded by a handful of beautiful mermaids who are determined to see that the treasure doesn't fall into the wrong hands. The original version of The Mermaids of Tiburon featured noted pin-up model Diane Webber as the queen of the mermaids, complete with a fishy tail; when the movie failed to do much business, director John Lamb added new footage in which the queen is joined by a bevy of other underwater beauties, who mysteriously have legs but also swim topless through the ocean depths. The nudie version of Mermaids of Tiburon was also distributed under the title The Aqua Sex.

Nancy Burns
as Mermaid
View All

Critic Reviews for The Mermaids of Tiburon

There are no critic reviews yet for The Mermaids of Tiburon. Keep checking Rotten Tomatoes for updates!

There are no featured reviews for The Mermaids of Tiburon at this time.

The Mermaids of Tiburon Quotes