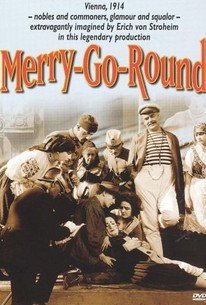 Best known today as the film which cost director Erich Von Stroheim his job at Universal Studios, Merry Go Round contains enough Von Stroheim touches to suggest that "official" director Rupert Julian merely tied together the film's loose ends. The titular merry-go-round is owned by the unspeakable George Siegmann, who inflicts all sorts of casual cruelties upon organ-grinder Mary Philbin. In addition to enduring Siegmann, Philbin must decide whether or not Austrian-count Norman Kerry truly loves her, or is merely toying with her in the months before his arranged marriage with countess Dorothy Wallace. The latter seems to be the case when Kerry goes through with his marriage. While fighting in the Franco-Prussian war, Kerry fortuitously comes across Philbin's dying father (Cesare Gravina), who roundly chastises the count before expiring. After the war, an impoverished and widowed Kerry tries to make amends to Philbin, who by now is herself engaged to hunchbacked circus performer George Hackathorne. A happy ending is in store for all concerned except the villainous Siegmann (remember him?), who suffers an appropriately grisly demise.

Critic Reviews for The Merry-Go-Round

There are no critic reviews yet for The Merry-Go-Round. Keep checking Rotten Tomatoes for updates!

Audience Reviews for The Merry-Go-Round

A different kind of story, and I liked it for being different and about the strange characters like the hunchback, but in the end the plot is very predictable. I would like to see this again sometime, though.