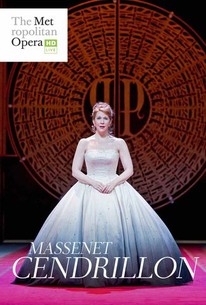 Fathom Events and The Met: Live in HD present a broadcast of Massanet's Cendrillon, live in select cinemas nationwide on Saturday, April 28. For the first time ever, Massenet's sumptuous take on the Cinderella story comes to the Met. Joyce DiDonato stars in the title role, with mezzo-soprano Alice Coote in the trouser role of Prince Charming, Kathleen Kim as the Fairy Godmother, and Stephanie Blythe as the imperious Madame de la Haltière. Bertrand de Billy conducts Laurent Pelly's imaginative storybook production.

There are no critic reviews yet for The Metropolitan Opera: Cendrillon. Keep checking Rotten Tomatoes for updates!

There are no featured reviews for The Metropolitan Opera: Cendrillon at this time.