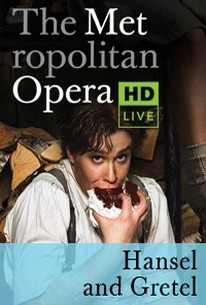 Fathom presents the excitement of The Metropolitan Opera in HD on the Big Screen! The LIVE broadcast of Humperdinck's Hansel and Gretel will be shown for one day only on Tuesday, January 1 at 1PM ET / 10AM PT in select theatres nationwide. Most fairy tales, though charming on the outside, have darker underpinnings. Alice Coote and Christine Schäfer play the siblings lost in a shadowy world of unknown menace, pursued by the Witch (portrayed by tenor Philip Langridge) who seeks to devour them.

There are no critic reviews yet for The Metropolitan Opera: Hansel and Gretel - NCM Event. Keep checking Rotten Tomatoes for updates!

There are no featured reviews for The Metropolitan Opera: Hansel and Gretel - NCM Event at this time.