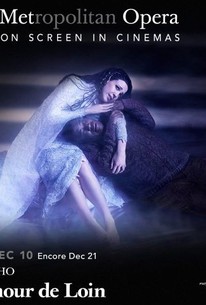 The Met: Live in HD 2016-17 season presents a broadcast of Saariaho's L'Amour de Loin, presented live in select cinemas nationwide on Saturday, December 10. One of the most highly praised operas of recent years, which had its premiere at the Salzburg Festival in 2000, Kaija Saariaho's yearning medieval romance L'Amour de Loin ("Love From Afar"), has its Met premiere this season. The production is by Robert Lepage, co-produced with L'Opéra de Québec, in collaboration with Ex Machina. Debuting Finnish conductor Susanna Mälkki leads the performance, which stars Susanna Phillips as Clémence, Eric Owens as Jaufré, and Tamara Mumford as the Pilgrim who carries messages of love between them.

There are no critic reviews yet for The Metropolitan Opera: L'Amour de Loin. Keep checking Rotten Tomatoes for updates!

There are no featured reviews for The Metropolitan Opera: L'Amour de Loin at this time.