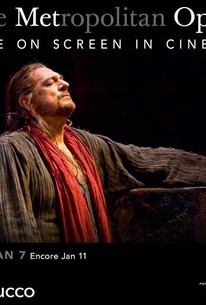 An encore performance of Verdi's Nabucco will be shown in select cinemas nationwide on Wednesday, January 11. Met Music Director James Levine conducts Verdi's early drama of Ancient Babylon, Nabucco, with Plácido Domingo adding a new role to his Met repertory as the title character. Liudmyla Monastyrska sings the tour-de-force role of Abigaille, Nabucco's willful daughter, with Jamie Barton as Fenena, Russell Thomas as Ismaele, and Dmitri Belosselskiy as the prophet Zaccaria, the role of his 2011 Met debut.

There are no critic reviews yet for The Metropolitan Opera: Nabucco Encore. Keep checking Rotten Tomatoes for updates!

There are no featured reviews for The Metropolitan Opera: Nabucco Encore at this time.