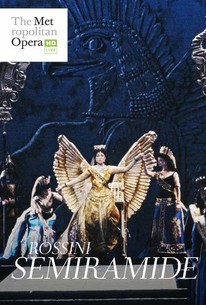 Fathom Events and The Met: Live in HD present a broadcast of Rossini's Semiramide, live in select cinemas nationwide on Saturday, Mach 10. This masterpiece of dazzling vocal fireworks makes a rare Met appearance-its first in nearly 25 years-with Maurizio Benini on the podium. The all-star bel canto cast features Angela Meade in the title role of the murderous Queen of Babylon, who squares off in breathtaking duets with Arsace, a trouser role sung by Elizabeth DeShong. Javier Camarena, Ildar Abdrazakov, and Ryan Speedo Green complete the stellar cast.

Angela Meade
as Queen of Babylon

There are no critic reviews yet for The Metropolitan Opera: Semiramide. Keep checking Rotten Tomatoes for updates!

There are no featured reviews for The Metropolitan Opera: Semiramide at this time.