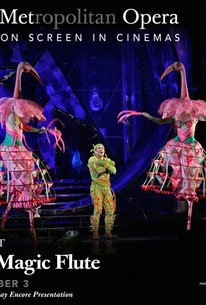 The groundbreaking broadcast that launched the Met's award-winning Live in HD series to movie theaters in 2006, The Magic Flute enchanted opera lovers from around the world with the whimsical humor and breathtaking puppetry of Julie Taymor's hit production, presented in a shortened English-language version. Under the baton of Maestro James Levine, a winning ensemble cast - including Nathan Gunn, Ying Huang, Matthew Polenzani, Erika Miklosa, and René Pape - brings fresh life to Mozart's timeless fairy tale.

There are no critic reviews yet for The Metropolitan Opera: The Magic Flute - Special Encore. Keep checking Rotten Tomatoes for updates!

There are no featured reviews for The Metropolitan Opera: The Magic Flute - Special Encore at this time.