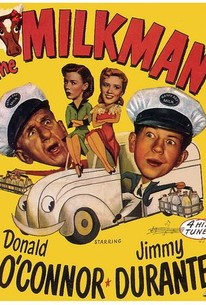 The Milkman is a low-key variation of a theme explored in such slapstick festivals as The Fuller Brush Man and The Yellow Cab Man. Donald O'Connor plays Roger Bradley, who hopes to become a top-flight milkman to please his father (Henry O'Neill), the owner of the milk company. Jimmy Durante co-stars as Breezy Albright, the older milkman who teaches Roger the ropes. After several comic set pieces, the plot rears its ugly head in the form of John Carter (Jess Barker), the nephew of rival milk-company proprietress Mrs. Carter (Elizabeth Risdon). Carter has gotten mixed up with a nasty bunch of gamblers, led by Mike Morrel (William Conrad). This leads to an exciting, albeit chucklesome finale wherein Roger, Breezy and ingenue Chris Abbott (Piper Laurie) combine forces to rout the bad guys.

Joe Kerr
as Man in window

Cliff Lyons
as Man
View All

Critic Reviews for The Milkman

The Milkman makes little sense, but proves a happy romp for the unique talents of Donald O'Connor and. Jimmy Durante.

This unassuming little comedy-with-music didn't cost a mintful of money to make, but its better moments offer more fun than many a lavish extravaganza.

There are no featured reviews for The Milkman at this time.