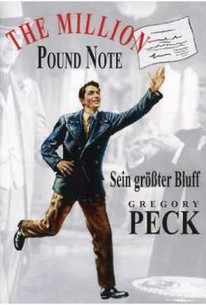 Released in the US as Man With a Million, The Million Pound Note is a satisfying adaptation of a satirical short story by Mark Twain. Gregory Peck plays Henry Adams, an impecunious American living by his wits in London. Henry becomes the object of a wager between millionaire brothers Oliver and Roderick Montpelier (Ronald Squire and Wilfred Hyde-White), who want to find out if a man with a million pound note in his bank account could live comfortably for one month on the strength of that note--without ever spending a penny of it. When Henry is given the note and lets it be known that he has it, every courtesy imaginable is extended to him by hoteliers, restauranteurs, etc. Trouble brews when Henry uses the note's reputation to speculate on the stock market. When his creditors demand that he produce the note as an act of faith, Henry is unable to do so, whereupon pandemonium reigns--and the audience's laughter cascades. ~ Hal Erickson, Rovi

Joyce Grenfell
as Duchess of Cromarty

A.E. Matthews
as Duke of Frognall

Hugh Wakefield
as Duke of Cromarty

Critic Reviews for The Million Pound Note (Man With a Million)

Although neither as frothy nor as satirical as the yarn's comic possibilities might lead you to expect, this British film has more than a few amusing moments.

It was a gentle satire of manners that never had enough spice in it to win me over.

Audience Reviews for The Million Pound Note (Man With a Million)

Lite cinema featuring Gregory Peck as a penniless American stranded in London. On a bet, two wealthy bankers give him a million pound note with the stipulation that IF he can go one month without cashing it he can have any job his heart desires (within reason, of course). Yes, it's a plot riddled with holes but with Peck carrying the film nobody seems to mind. A delightful little comedy.

This enjoyable fable from Mark Twain is a good natured forerunner to the likes of Trading Places and Mr. Deeds. An amusing satire on society and it's measure of a man's worth as the sycophants an honest, intelligent and upstanding working man (Gregory Peck at his most likeable) encounters treat him initially with disdain, which soon turns to obsequiousness once they realise that he is a "millionaire".

The Million Pound Note (Man With a Million) Quotes