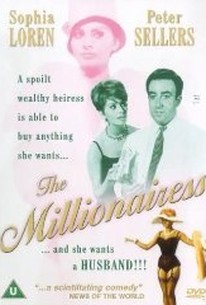 A beautiful and wealthy woman in the market for a husband believes she has found the right man -- only to discover he isn't especially interested, in this comedy based on a play by George Bernard Shaw. Epifania Parerga (Sophia Loren) is a woman who has inherited a vast fortune, making her the wealthiest woman on Earth. All Parerga really wants is a happy marriage, but her first stab at matrimony, with Alastair (Gary Raymond), is a disaster, and when she visits a psychiatrist in hopes of learning what she did wrong, her analyst, Dr. Adrian (Dennis Price), attempts to seduce her. Parerga is nearly ready to give up when she meets Dr. Ahmed el Kabir) (Peter Sellers), a shy and well-mannered Indian physician who operates a clinic for the underprivileged. While Kabir is personable, he seems to have no interest in Parerga's money and is unfazed by her beauty; convinced he can love her simply for who she is, Parerga decides Kabir is the man for her. However hard Parerga tries to throw herself at him, Kabir refuses to budge, and even after she bankrolls a new clinic for him, he does not respond to her advances. Eventually, Parerga offers Kabir a challenge -- she bets him that he can't triple his profits at his new clinic in three months, while he in turn wagers her that she cannot live without money for the same period of time. A spin-off of the The Millionairess was a novelty song called "Goodness Gracious Me", in which Sellers and Loren duetting as a doctor from India and his alluring patient; a recording of the tune became a hit single in the United Kingdom. ~ Mark Deming, Rovi

Critic Reviews for The Millionairess

One of the least memorable of Bernard Shaw's plays has been turned into a handsome but oddly sluggish film under the direction of Anthony Asquith...

The Millionairess is a bit of comic pastry that comes out too rich and soggy. It needed style and a light touch.

The stars help, but this should be so much better than it is.

Audience Reviews for The Millionairess

Sad to say, this is a disappointingly mediocre film. A 1960 romantic comedy starring Peter Sellers and Sophia Loren sounds like a surefire treat, but the two have little chemistry as actors and even less as the two characters they portray. Loren is a chic heiress, and Sellers is an altruistic Indian doctor. She becomes determined to win his love for reasons which must have been in the script's first draft, because they're certainly missing from the final product. The eventual plot gimmick is that the two give each other a test to prove their worthiness in marriage: He has to turn $500 into $15,000 within three months, and she has to live on a mere 500 rupees within the same period. However, the story takes far too long to arrive at this point, and once it does, the challenges are dispensed with far too easily. Really, the best reason to see this film is to ogle Loren's astonishing beauty -- and, yes, she has a couple of tame lingerie scenes. No doubt, "The Millionairess" is an obscenity compared to George Bernard Shaw play on which it is loosely based.