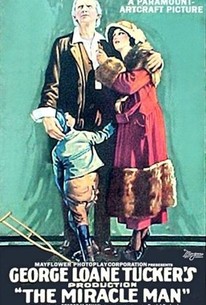 A group of crooks in New York City's Chinatown hear about an old hermit (Joseph J. Dowling) in a small upstate village who's performing miraculous cures. When they find out that the man is blind and deaf, they decide to pay him a visit. The leader, Tom Burke (Thomas Meighan), has his girlfriend Rose (Betty Compson), pose as the hermit's long-lost grand niece. Burke, Rose and the other crooks, the Frog (Lon Chaney) and the Dope, a morphine addict (J. M. Dumont), all become part of the hermit's household. The Frog fakes being a cripple, and the hoodlums figure that when he pretends to be cured, people will pay loads of money -- to the gang -- for the hermit's services. But they find out that the hermit's powers are real. This begins a change in the crooks -- the Dope quits drugs, the Frog is adopted by a gray-haired country lady, and when Rose is courted by a millionaire, she prefers to stay with Burke, who is finally won over by the hermit's faith. This film was based on a play by George M. Cohan, which was adapted from a book by Frank Packard.

Lon Chaney
as The Frog

Jean M. Dumont
as The Dope

Joseph J. Dowling
as The Patriarch

Critic Reviews for The Miracle Man

The pictorial quality seems to hold a place equal to that of the dramatic values In this picture. Many of the shots reveal a talent for composition that is rare.

You've been crying for something "different." Here you have it. The Miracle Man is an unusual picture. It is a great picture. And George Loane Tucker is its director.

The story is of interest to believer and unbeliever alike. There is a human interest to plot that cannot fail but grip man, woman or child.

We do not mean to suggest that The Miracle Man is the summit of human achievement, as regards the cinematograph. It is not that, but it does at least equal, and possibly excel, any film that has hitherto been produced.

Mr. Tucker starts his story slowly, ends it badly, and lets it drag perceptibly after the big scene.

The general setting out of the story is good, and the artists know their business.

The Miracle Man is a sincere work, and the nearest approach to any rival of Mr. Griffith for screenic honors, falls to Mr. Tucker. It will be interesting to see what he will do next.

There has been no more beautiful or fascinating play on the screen than is The Miracle Man. It is all entertainment.

The best review that could be written would be but scant justice to the production. It must be seen to be appreciated.

George Loane Tucker has evidently labored unsparingly upon every branch of production connected with The Miracle Man, and nowhere is his good judgment more manifest than in his selection of the cast.

It is time to rejoice. The Miracle Man is the most exceptionally entertaining and tremendously appealing dramatic production I have ever seen.

George Loane Tucker, is producer and director, has handled the striking story with the touch of genius. Interpreted by a cast far above the average, its gripping appeal holds the audience spellbound.

There are no featured reviews for The Miracle Man at this time.