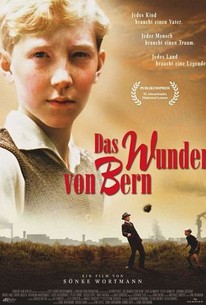 The Miracle of Bern Photos

German filmmaker and former professional footballer (read: soccer player) Sönke Wortmann directs the family sports drama Das Wunder von Bern (The Miracle of Bern). The title is in reference to the unexpected German victory over the Hungarians at the 1954 World Cup in Bern, Switzerland. In the working-class Ruhr region of West Germany, the Lubanski family eagerly awaits husband and father Richard (Peter Lohmeyer) to be released from the Soviet POW camp. During his absence, mother Christa (Johanna Gastdorf) and daughter Ingrid (Birthe Wolter) have started up their own business, while son Matthias (Louis Klamroth) has developed an interest in soccer. He idolizes local player Helmut Rahn, but his father doesn't approve of it. Meanwhile, sports journalist Paul Ackermann (Lucas Gregorowicz) heads to Switzerland to cover the World Cup events. The finale at the climactic soccer game was re-created with professional players from the German Football Liga along with a 3-D stadium and CGI crowd.

Critic Reviews for The Miracle of Bern

A powerful story that mixes football and patriotic sentiments in a melodramatic look at immediate post-war Germany.

Audience Reviews for The Miracle of Bern

There are no featured audience reviews yet. Click the link below to see what others say about The Miracle of Bern!

The Miracle of Bern Quotes