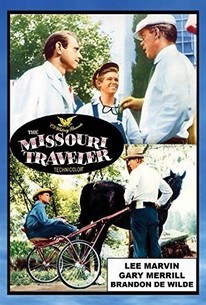 Missouri Traveler was one of a handful of independent films distributed by Disney's Buena Vista corporation. Brandon De Wilde heads the cast as 15-year-old orphan boy Biarn Turner. Doing his best to survive in the rural South of the pre-WW1 years, Biarn is unofficially adopted by crusty small-town newspaper editor Doyle Magee (Gary Merrill). Also taking an interest in Biarn's future is wealthy self-made farmer Tobias Brown (Lee Marvin), whose apparently cruel treatment of the boy masks his genuine affection and concern. Highlights include an annual trotting race and a climactic set-to between Magee and Brown. The Missouri Traveller is based on the novel by John Burress.

Will Wright
as Sheriff Peavy

Critic Reviews for The Missouri Traveler

There are no critic reviews yet for The Missouri Traveler. Keep checking Rotten Tomatoes for updates!

There are no featured reviews for The Missouri Traveler at this time.