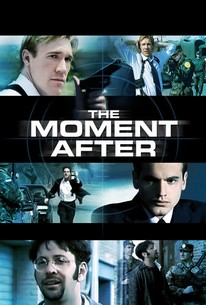 In the aftermath of the Rapture, two FBI agents embark on a frantic search for answers in this Christian-themed thriller starring David White and Kevin Downes. A mass disappearance has sent the world spiraling into confusion and turmoil, and as FBI agents Adam Riley (White) and Charles Baker (Downes) set out to seek answers, they soon discover that the world has become a very different place than it was just a few hours prior. For Agent Baker it's just another day on the job, but Agent Riley the mission is personal. When a mysterious man named Jacob Krause (Brad Heller) appears to begin organizing a para-military organization for an unknown conflict, both agents begin to suspect that Krause may hold the answers to the greatest mystery ever to befall mankind.

Critic Reviews for The Moment After

There are no critic reviews yet for The Moment After. Keep checking Rotten Tomatoes for updates!

Audience Reviews for The Moment After

There are no featured audience reviews yet. Click the link below to see what others say about The Moment After!

The Moment After Quotes