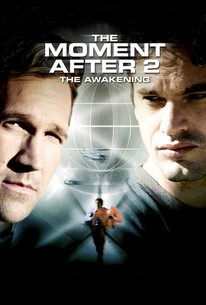 As the New World Order assumes control of all nations, former FBI Agent Adam Riley (David White) and his mentor Jacob Krause (Brad Heller) join a small band of Christians dedicated to keeping the word of God alive as the exciting Moment After saga continues. Adam Riley has taken control of his fate by staging a daring escape from death row, and now he has set out to reunite with his friend Jacob Krause - the leader of a small band of Christian rebels known as "The Way." As Adam's former partner Charles Baker (Kevin Downes) sets out to hunt down and crush the resistance under the command of Global Alliance Commander Fredericks (Monte Perlin), a small militia led by a man named "Captain" Jackson (Lonnie Colon) spies on "The Way" for his own personal gain. With the souls of all mankind at stake, "The Way" prepares to clash against the Global Alliance in the ultimate showdown of good versus evil.

Critic Reviews for The Moment After 2

There are no critic reviews yet for The Moment After 2. Keep checking Rotten Tomatoes for updates!

There are no featured reviews for The Moment After 2 at this time.

The Moment After 2 Quotes